There is no shortage of festivals for your social calendar all year round. In fact, you’d better just get most of these into your calendar right now, and even time your move around your favorites!

Foodies will love such events as the Harbor and Seafood Festival, Epicure:SB, the Vintner’s Festival, the Food Bank’s Fork & Cork Classic and the California Lemon Festival in Goleta. For those interested in cultural pursuits, mark your calendars for the French Festival in July, the International Film Festival in January, the Old Spanish Days of Fiesta in August, the Summer Solstice Parade, the Flamenco Festival and the I Madonnari street painting festival. There’s also a holiday parade every December, a summer Sandcastle Festival, and a spring International Orchid Show. And don’t forget Earth Day—this festival was actually started in Santa Barbara in 1970.

If your idea of a great event means an endurance race, then Santa Barbara has that too. There’s the International Full and Half Marathon every November, a triathlon in August, a half marathon through the wine country in May, and (not for the faint of heart or feet) the Pier to Peak Half Marathon in September. That’s not all—there’s the Chardonnay 10k in the spring, the 4th of July Semana Nautica, and the 39-mile Avon Breast Cancer Walk in September, to name just a few more athletic events.

Join hundreds of filmmakers and thousands of film enthusiasts as Santa Barbara welcomes the best of new, foreign and arthouse cinema.

A five day event organized to showcase the creative talent of people of all ages though livestock, agricultural, commercial and educational exhibits. An amusement park, live entertainment, carnival games and a kid’s section all compliment

The air is filled with music, laughter and tempting aromas of French cuisine being prepared by dozens of French chefs. Wandering mimes, jugglers and accordion players perform throughout the crowds.

Organizers say it’s your chance to “be Greek for the weekend.” Without going to Greece every year, this is one way to get your annual quota of elaborate costumes, authentic musicians & dances, spanakopita, baklava and gyros.

Today, the annual Harbor and Seafood Festival, held on the second Saturday in October, draws thousands of people to the Waterfront to enjoy succulent seafood like fresh lobsters and barbecued albacore, plus a host of other seafood treats and marine-relate

Billed as the Santa Barbara South Coast’s largest festival, this three day event is held Friday though Sunday on Linden Avenue in Carpinteria. 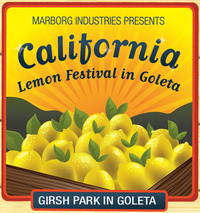 You will not want to miss Goleta Valley’s biggest celebration of the year held at Girsh Park.

The parade begins at 6:30 pm at State Street and Sola Street and concludes at Cota Street.

Starts at Cota Street on State Street and travels up to Micheltorena Street, ending at Alameda Park.

Madonnari, or street painters, transform the Mission plaza using pastels on pavement to create 150 vibrant and colorful, large scale images. We are proud to be the first to bring this romantic festival to the western hemisphere.